In 1894, Marie Francois Sadi Carnot, the president of France, was stabbed by a would-be assassin in Lyons. By today's standards, the wound was not severe; however, the knife severed the portal vein in his abdomen. Carnot bled to death because up to that point, no one had figured out how to repair blood vessels. 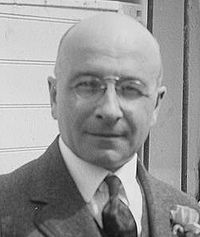 One man undertook to change that, Alexis Carrel, a student in Lyons who was appalled by Carnot's death, in his hometown, while a number of physicians stood by and watched.

But consider the problem — repairing a tiny, elastic, living tube, part of a network of tubes of different sizes and functions, so that it would retain its ability to channel many gallons of blood every day, birth to death, without a hitch.

The story is that Carrel — Dr. Carrel by 1900 — studied with Marie-Anne Leroudier, one of the most proficient needlewomen in Lyons (her work was exhibited at the Columbian Exposition in Chicago in 1893), learning to make minute, uniform stitches. He developed a triangular system that allowed him to rapidly close up a vein or artery end-to-end without having the stitches adhere to the opposite wall, ushering in the birth of vascular surgery.

Carrel came to the University of Chicago in 1904, where his prodigious 21 months' work as an assistant to G. N. Stewart at the Hull Laboratory laid the groundwork for transplantation surgery. That work was the basis for Carrel's becoming the first scientist working in the United States to win the Nobel Prize for medicine, in 1912. Carrel soon moved on to the Rockefeller Institute for Medical Research in New York.

(Carrel's collaborator at the U. of C., Charles Claude Guthrie, was miffed that he was not included in the Nobel Prize. Guthrie possibly lost points with the Nobel committee for his subsequent experiments in St. Louis with head transplants.)

Carrel was a complicated man, compassion and curiosity mixed up with arrogance and resentment. He was a eugenicist — that is, he subscribed to the false science of "perfecting" the human race by eliminating traits judged to be inferior — and he was also an enthusiastic believer in the miracle cures at the shrine at Lourdes. At the time of his death in 1944, in Paris, he was working on a project for the collaborationist Vichy government.