Fourteen of 105 obstetrics-gynecology practices surveyed by the South Florida Sun-Sentinel last month said they will not take on obese women as patients.

Representatives of six of the practices cited higher rates of complications in women who are obese, but other respondents said heavier women tax their exam tables and other equipment.

"People don't realize the risk we're taking by taking care of these patients," the paper quoted Dr. Albert Triana as saying. Dr. Triana is one of two physicians in a South Miami practice that turns away obese patients, according to the article. "There's more risk of something going wrong and more risk of getting sued."

Seventy-two million Americans — about one in three — meet the criteria for obesity, according to the Centers for Disease Control and Prevention in Atlanta, Ga.

"If I had that policy, I wouldn't have a practice. I'd lose half my patients," Dr. Maureen Whelihan, a West Palm Beach ob-gyn, told the Sun-Sentinel's Bob LaMendiola. "We never turn down anyone."

In a followup article in American Medical News, reporter Christine S. Moyer asked doctors to comment on the practice of turning patients away because of their weight.

"This is [primary care physicians'] patient population, and [they're] here to serve the patients," said one of them, Dr. David Bryman, a Phoenix family physician specializing in bariatric medicine, which deals with the causes, treatment and prevention of obesity. Dr. Bryman is president-elect of the American Society of Bariatric Physicians. "If that requires getting a little extra equipment to accommodate them, it's just part of the practice of medicine."

Annie Murphy Paul's new book, Origins: How the Nine Months Before Birth Shape the Rest of Our Lives, is getting the star treatment. It is the subject of a Time magazine cover story (written by Paul), and an article by the New York Times' Motherlode blogger, Lisa Belkin.

And why not? Paul has written what looks to be a fascinating exploration of the explosion of research on the effects of the environment human beings encounter while developing in their mothers' wombs. 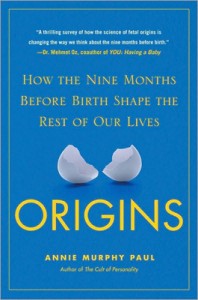 In a guest post for Motherlode (the link is above), Paul writes, "Startling as it may seem, qualities ranging from our intelligence to our temperament to our health, and our susceptibility to diseases as varied as cancer, asthma, obesity, diabetes and mental illness, are affected by our experiences as fetuses decades ago."

We have already considered one aspect of this research here at Birth Story, how a mother's weight gain during pregnancy can influence her infant's lifetime chances of being able to maintain a healthy weight. But Paul covers the waterfront in this "new chapter in the long-running nature-nurture debate," as she calls it.

In her Motherlode guest post, Paul raises and then downplays the likelihood that mothers will be blamed for anything that goes awry with their children, given the new understandings of the importance of what goes on in the womb.

Love Paul's optimism! And, I'm impressed she researched this book while she was pregnant. I'm looking forward to reading it.

Here perhaps is one clue to the conundrum of why maternal mortality in the United States is relatively high for an industrialized nation, 12.7 deaths per 100,000 births in 2007: Two thirds of the women who died giving birth in New York State between 2003 to 2005 were obese, the New York Times reported on Sunday. The Safe Motherhood Initiative provided the figure.

Not only that, but very obese women, defined as having a body mass index (BMI) of 35 or higher, are three to four times more likely to experience a Caesarean section with their first baby than other as first-time mothers are, Anemona Hartocollis reports in the NYT story.

Obesity is not only hard on mothers, but it may also pose problems for their infants. Babies born to obese women are almost three times as likely to die within their first month of life than those born to women with BMIs within the normal range. Obese women are also nearly twice as likely to have a stillborn baby, Hartocollis reports.

About one in five women are obese when they become pregnant, according to data from the Centers for Disease Control in Atlanta, Ga. Obesity is gauged by a BMI of at least 30. A woman who stands five-foot-seven inches tall and weighs about 195 pounds has a BMI of 30.