Robbie and Susan Goodrich had been married three years when she died of an amniotic fluid embolism during the birth of her son Charles Moses last year.

The couple had been full of plans. Robbie would ramp up his career so that Susan could scale hers back to spend more time with the children. Now he's going back to work after a year's leave of absence, as a single father. 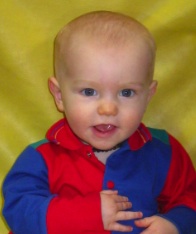 During a phone interview, Goodrich said, "I'm throwing myself into my work, so I can go home and be with the kids."

Goodrich said, "I have to re-invent myself as a widower, with two kids in diapers. I'll do what has to be done to put bread on the table, but it's just me now.

"I know that the process isn't over. I have to do everything that has to be done emotionally to deal with the loss of Susan. I have to accept that it won't be the same me or the same life," he said.

On Dec. 10, the family celebrated Susan's birthday the way they usually had. They cut down a tree for Christmas, went snowshoeing, made Susan's favorite tapas.

"We celebrate her birthday. Her death day coincides with Moses' birthday but we celebrate Moses and the life that she gave on that day.  We celebrate who she was and how she lived and not the accident of her death," Goodrich said. "Though that's easier to say than to do."