Fathers who pushed to be included in their children's births beginning in the 1950s have brought real change to the modern birth, according to historian Judith Walzer Leavitt's 2009 book Make Room for Daddy.

Buoyed by changing perceptions of how men should function in society, fathers have created "unprecedented new roles for themselves in a traditionally women's event"  and have "helped to make hospitals more flexible in how they handled birth," Leavitt writes. 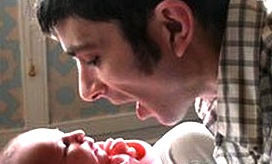 Dads' participation in birth has helped to break down the "mystique of modern medicine and further opened the world of obstetrics to lay participation and interpretation," she writes.

Fathers often report that witnessing a child's birth is one of the best experiences of their lives.

"It was better than any game I've played or any big hit I've had," said Ian Desmond, the Washington Nationals' shortstop who recently took advantage of Major League Baseball's new paternity leave to attend the birth of his son, Grayson.

However, the journey has not always been easy for men, who in their public lives often are far more in control than they feel attending the birth of one of their own children.

Leavitt quotes the writer Stephen Harrigan, who wrote in Reader's Digest in March, 1979, about attending the birth of his son. Before the birth, Harrigan worried that he would be no more than a spectator metaphorically holding out Gatorade to his wife, the "athlete who would finish the race."

Harrigan found the experience to be more profound and involving than he expected, but some other fathers feel "at sea, abandoned and out-of-control" at birth, Leavitt writes.

Some fathers cringe at the idea of watching their wives in pain or perhaps fear the experience will damage the desire they feel for their wives. Fathers attending birth are now so ubiquitous that a reluctant dad may well feel pressured to go.

Nevertheless, men's foray into the birth process, which may begin with their attending prenatal classes, has led to their increased participation in their families' lives and experiences, compared with those 1950s dads who began the process, Leavitt writes.

Dads who don't attend their children's birth lose a crucial opportunity, according to researcher Jessica Weiss, who goes so far as to say they risk having "missed the boat of shared parenting."