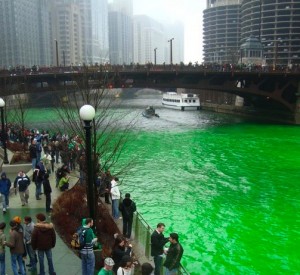 The Chicago River, ready for the parade

From Chicago on St. Patrick's Day, here is our famous green river, dyed last Saturday for the big downtown parade, captured by my friend Bill Linden.

What does this have to do with the birth story? Well, nothing, but we of Irish descent just get the one day to celebrate, you know? Or, counting parade day and the festivities on the South Side on Sunday, three days, tops.

And Ireland does have the lowest maternal mortality rate in the world at last tally, with just one mother dying per 100,000 births in 2005.

That certainly is something to celebrate, and to remark upon.

The World Health Organization estimates that the "natural" maternal mortality rate, which women with no access to health care could be expected to suffer, is between 1,000 and 1,500 per 100,000 births.

The highest rates occur in politically unstable parts of Africa and Asia, notably Sierra Leone (2,000 deaths) and Afghanistan (1,900). The rate in the United States is 13, up from 12 the previous year. (All figures are from 2005.)

WHO defines maternal mortality as the death of a woman while pregnant or within 42 days of termination of pregnancy, regardless of the duration or site of the pregnancy, as long as the cause of death is related to or aggravated by the pregnancy or its management, and not from accidental or incidental causes.