New mom Gisele Bundchen touched off a firestorm of criticism when she told the British edition of Harper's Bazaar that mothers around the world should be required by law to breast-feed for six months. 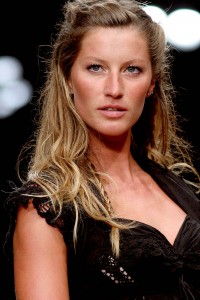 Boston Herald columnist Margery Eagan called Bundchen "a silly twit." Mark Marino, writing on CNN Entertainment's Marquee Blog, ventured that the 30-year-old Brazilian-born supermodel "might have made a boob of herself," based on responses from indignant readers of the blog.

Those included one woman identified as "Angela," who said that having "just popped out a kid" seemed to have given Bundchen the idea she "knows what's best for children and mothers."

Eagan admitted that her "catty little heart leaps with joy" to see a woman so "lucky in looks, in love, in life" whose "perfect foot" keeps finding its way into her "perfect pouty mouth," first touting her painless home birth eight months ago, now with her pronouncement that everyone should be legally required to breast-feed. And in that, Eagan probably stands in for a great many of us who can't help but notice that Bundchen's life is not exactly lived in the trenches.

Bundchen did back down from her provocative statement, writing in her blog, "I am not here to judge.... I think as mothers we are all just trying our best."

Of her backtracking, Eagan wrote, "Too late! Too late!"

But here's the thing. Bundchen has a right to her opinion (she did say it was her opinion), and she is in a position where people ask her her opinion and then print it up in glossy magazines.

Here's another thing: She's not wrong. She's not saying parents should hang their kids out the window by their heels; she's saying every mother should breast-feed for six months.

Sure, plenty of women can't breast-feed, others simply don't want to, and working mothers in this country, at least, have to be highly motivated to keep it up for any length of time. And the logistics — and the politics — of enacting a "worldwide law" mandating six months of breast-feeding for every baby make it, let's say, unlikely.

However, the health benefits of breast-feeding are well documented. The World Health Organization and the American Academy of Pediatrics join Bundchen in recommending that infants be breast-fed exclusively for at least six months. The AAP suggests mothers continue to breast-feed, even as a baby begins to eat other foods, for at least a year in all; the WHO recommends two years or more.

"Breast-feeding can decrease the incidence or severity of conditions such as diarrhea, ear infections and bacterial meningitis. Some studies also suggest that breast-feeding may offer protection against sudden infant death syndrome (SIDS), diabetes, obesity and asthma among others (conditions)," the AAP stated in its 2005 position on breast-feeding.

Researchers recently teased out some of the specifics of the good things breast-feeding does for babies, concluding that breast-feeding represents "an intriguing strategy" to maximize an infant's chances for survival.

But breast-feeding still gets a bad rap from a squeamish public, and even, down in those trenches, from doctors.

"It is tragic that a supermodel-mom dispenses better advice than many doctors and most governmental agencies," wrote pediatrician/author Jay Gordon MD on the Huffington Post. "We must listen if her advice and high profile can save babies' lives."

Lastly, I must say that the world is full of women who think that the fact that they popped out a kid or two makes them experts on parenting. Just usually not as big an expert as people who have never popped out a kid.