Mary Wollstonecraft, the earliest feminist writer in English, died in childbirth in London in 1797. At a time when women were bound to the home and dependent on the men in their lives, Wollstonecraft was a professional writer who had already had one child out of wedlock, and had only recently married her lover, the writer William Godwin. 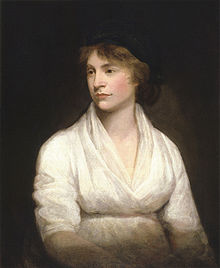 The birth began with a midwife of Mary’s choosing, but when the placenta would not come out, a male physician was called in and removed it surgically.  Wollstonecraft died 11 days later, at the age of 38, of puerperal fever, a wound infection.

At the beginning of the 19th century, women found their public voice.  Wollstonecraft didn’t have an easy life, but the speed with which others followed in her footsteps reflects seismic changes.  Jane Austen’s first novel, Sense and Sensibilty, was published in 1811; born in 1775, Austen was a well educated woman.

Mary Wollstonecraft not only supported herself with her writing, but she started women on the path to speaking for themselves. On the day she died, Godwin wrote, “There does not exist her equal in the world.”

The daughter Wollstonecraft bore that day grew up to marry the poet Percy Bysshe Shelley, and to write a seminal Gothic novel, Frankenstein, as Mary Shelley.

One thought on “The death of an uncommon woman”